My husband, I and my 3-day old daughter were driving from the hospital to our apartment. The route to home was the same, which I had taken every morning for about a year, from home to gym and back. But today, it was completely different. I was a mother, my husband was a father and we had baby. The most appropriate song played in the car “ajeeb dastan hai ye, kahan shuru kahan khatam”.

My husband who always has something to say, was quiet. I bet, he too, had a lump in his throat with all the mixed emotions, like I did. The road which we traveled more than a hundred times in the last few years looked, and felt, so different.

Three days back, I entered a VERY bright and very cold operation room. I started to shiver. This was the coldest I had been the entire pregnancy. I think it was because of added nervousness. I realized that there was no going back. This was it.

The moment that needle goes into my spine, it will change everything forever. That was probably the first time it struck me that I am going to bring a person on the planet. Till that time, I just had something in my tummy which would often kick, used to make me nauseous, give me back aches and that was all. It was all mine.

At that moment, I had an epiphany that I did not want to take my baby girl out of me. I thought she would be too far. And for the first time, I thought of what would happen to her if something were to happen to me on that operation table.

Within moments, I was numb from waist down and the doctor started explaining to me what she was going to do. People rushed in the OT and started introducing themselves to me. I was half asleep from an exhausted night I had. The nurses called my husband in the OT, he looked like he was going on a space mission.

He was so excited, his eyes were shining. He was going to be a dad and you could see it. The doctors cut me open and he was still ecstatic about it. A few minutes after, I heard the doctor saying, “there she is, oh she is tiny”.

I was still worried because I did not hear a sound of the baby. My husband rushed over to her and came back with her first picture to show me. She was a gooey mess, but she was so beautiful and he said “She’s right there and she is awake, she is so calm and is observing the room. She hasn’t cried at all”.

I passed out as soon as I knew she was okay. I could hear the doctors asking me if I was doing okay, I wanted to say yes, but I just could not. Moments later, I was wheeled out from the OT to a recovery room and on my way, I pressed a button that played nursery rhyme to tell everyone on that floor, that a baby was born.

Next two days in the hospital were so long, yet went by so fast that I think it was just one day. Feeding every two hours, trying to walk and I was surprised by my bladder’s ability to hold water!

Friday morning, the doctor told us we could go home. The grandparents were already home waiting for us. Now, there were no nurses, it was just us and the baby.

The ride back home I was terrified, excited, happy, confused, worried, and more, at once! And I bet my husband felt the same way. All he said was, look Baby, that was your hospital, that is where you were born and now we are going to your first home. 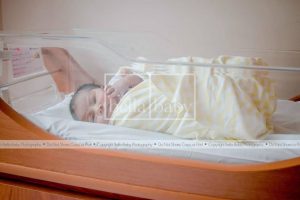